Involving about one-fifth of the student body, San Marcos Academy’s production of The Little Mermaid in the spring of 2018 was a high-water mark for the school’s Theatre Arts program. More than 1,000 guests packed the Robinson Christian Center to see the musical during its three-day run. The Little Mermaid followed several other outstanding productions in the past three years, including The Jungle Book, Willy Wonka and Stuart Little. Under the leadership of theatre instructor Mattie Howard, each of these shows raised the bar for excellence in student stage performance.

Mrs. Howard has chosen to step down as theatre instructor next year in order to spend more time with her family and focus on her duties as Assistant Director of Admissions at SMA. She has been working primarily with Lower School admissions as the Academy expands its elementary program to include grades K-5 in 2018-19. 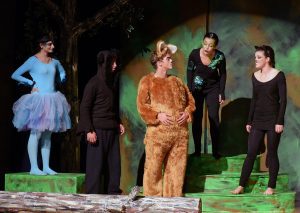 SMA is pleased to announce that Daryl Fleming, a Texas Secondary Theatre Teacher of the Year, will be joining the Academy faculty in the fall of 2018 as our new theatre instructor. Mr. Fleming taught theatre arts for 29 years at San Marcos High School and at Briesemeister Middle School in Seguin, garnering numerous honors along the way. In addition to the state teaching award, he was named Teacher of the Year five times at the campus level, twice at the district level and once at the regional level (Secondary Teacher of the Year for Region XIII).

While teaching middle school, Mr. Fleming developed the Seguin ISD Storyteller-in-Residence program where, as part of his teaching assignment, he told stories to more than 4,000 elementary students each year. He also assisted elementary teachers in developing lessons using storytelling. Fleming has conducted workshops for storytelling nationally and locally, including seminars at Texas State University, the International Reading Association convention, and the Texas Educational Theatre Association. 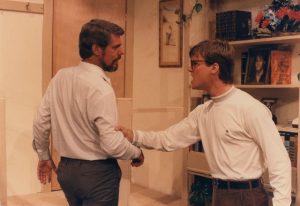 Daryl Fleming (left) and Stephen Bittrich perform in “Tribute” at the Circle Arts Theatre in New Braunfels in 1985.

As an actor himself, Mr. Fleming has performed in several local community theatres. His roles include Atticus in To Kill a Mockingbird, Captain Keller in The Miracle Worker and George in Same Time Next Year.  He has also had film roles in Yorick and as host/narrator of The Texas Collection for Baylor University. Additionally, he has produced several original plays and has published articles, poems and short stories.

A self-employed carpenter, Mr. Fleming lives in a house he built himself on a farm south of San Marcos which has been in his family for five generations. He and his wife, Patricia, a senior lecturer in the School of Music at Texas State, have three children.

The future for San Marcos Academy Theatre Arts is bright as we welcome Mr. Fleming to our campus. “I am so excited for SMA,” Mrs. Howard said. “We have the best theater students around, and with Mr. Fleming coming on board, our students will shine even brighter! I will be sitting front and center during each production cheering them on!”

Lessons from the Mountain Laurel