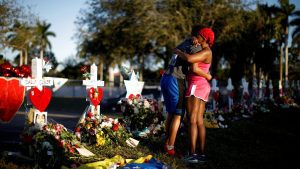 School safety has been a big topic in the news following the tragic Parkland, Florida school shooting in February. San Marcos Academy is not taking the potential threats of this world lightly. It is one of our top priorities at SMA to keep students safe while they are on our campus. Over the past three years, our Development Office and Crisis Management Team have joined together to make a number of improvements to our overall campus safety plan.

San Marcos Academy was blessed to receive funding that allowed us to upgrade our camera system in many key areas of campus. This video system provides the Academy with the means to surveil the most active portions of our campus from multiple angles with clear images. Additionally we have upgraded the public address system around campus. Our system now allows  announcements to be made and broadcast over almost all areas, including outdoor venues. This is an in important feature because our students are often out on the campus grounds and not necessarily inside of a building. Another upgrade to our school safety program has been the installation of more effective door locks throughout several buildings.

We had an opportunity to test some of our school safety features on Feb. 15 when we held a “Lock Down” drill on campus. This particular drill is an active shooter protocol and coincidentally occurred the day after the tragic shooting in Parkland. Although we considered  postponing the drill in the wake of the Florida tragedy, we determined that it would be good to address it while the issue was still raw and fresh in everyone’s mind. There were approximately 50 Hays County Sherriff’s deputies, Texas State Troopers, San Marcos Police officers, San Marcos Fire Department personnel and local San Marcos EMT employees who were present to conduct the drill. 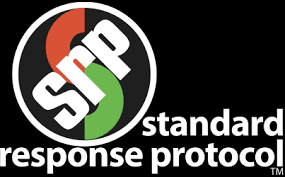 The drill is part of the Standard Response Protocol implemented by schools across Hays County. At the conclusion of each drill, the Academy is issued a critique of the drill and possible things to improve upon. We were pleased to receive a glowing report. Our students were receptive and aware of the importance of this drill.

Another aspect of our school safety program is our front gate operation, which has been a work in progress and will continue to be so as we develop new methods and technology. Currently we utilize a software program, connected to law enforcement databases, that allows guest tracking by scanning a visitor’s driver’s license. This procedure is utilized for guests of the Academy who do not have a campus access sticker affixed to the windshield of their vehicle.

If you have driven into the Academy recently, you most likely encountered one of the three gentlemen who supervise the front gate area. We would like to take this opportunity to introduce you to this team. 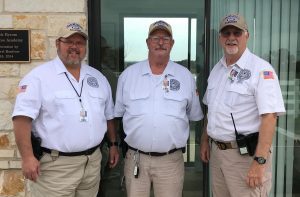 First is Mr. Michael Smith, our Campus Safety Officer, (pictured at far right in photo above) who has been with the Academy for three years. His wife, Pam Smith,  is one of the nurses in our infirmary. Mr. Smith brings more than 25 years of law enforcement and related areas of experience to the Academy. He served in two different sheriff’s departments as well as several years with the Texas Parks and Wildlife Department and the Texas Department of Criminal Justice. Mr. Smith retired as an Advanced Peace Officer. Mr. Smith’s father and uncle both attended SMA  prior to their service in the military during World War II.  “Being a part of San Marcos Academy has been a true spiritual experience,” Mr. Smith said. “I feel the legacy that my father and uncle began here so many years ago.”

Also working the front gate area during the school day is Mr. Michael Kloss (pictured in middle in photo above) . Mr. Kloss has been with SMA  for about a year and was had formerly served as a security officer for more than 8 years at the University of Texas. He was described by people who knew him there as kind and protective. “I thank God every day that I get to come to San Marcos Academy to keep your children safe from the bad things in this world,” Mr. Kloss said.

Last, but certainly not least, Mr. Thomas Ormsby (pictured at far left in photo above) supervises the gate area during the late afternoon and early evening hours. Mr. Ormsby comes to SMA with 30 years of law enforcement experience. He proudly served in the U.S. Army Reserves and attended Southwest Texas State. For 26 years, Mr. Ormsby worked for the Hays County Sherriff’s Department, filling numerous roles, including criminal investigations, patrol, and crisis negotiations. In 2017, he retired from the department as a Master Peace Officer. “Protecting and serving the community has been a part of my life for nearly 29 years,” Mr. Ormsby said. “When I retired, something was missing in my life, and I felt like I needed to serve again and that brought me to San Marcos Academy. The safety of the students, faculty and staff is my top priority as a safety officer.”

We are truly blessed to have these gentleman as a part of the school safety team and the San Marcos Academy family.

With the addition of the La Cima housing development adjacent to our campus, our front gate area has been a busy construction zone. Motorists who are entering and exiting our campus should be extra cautious of other vehicles as they move in and out of the construction site. We particularly want to emphasize the importance of making a complete stop at the stop sign located at the intersection just past our access gate as you exit and approach Academy Oaks Drive. We encourage drivers to observe and follow that road sign to prevent any accidents with vehicles coming in or exciting from the new La Cima entrance road.

As mentioned before, school safety is of the utmost importance to the SMA Administration and Board of Trustees. We are constantly in pursuit of more efficient and effective ways to protect all those who are part of the Academy family.