Although SMA graduate and Alumni Council member Allen Butcher ’68 is now fully retired and living in San Marcos, he probably won’t be slowing down any. As an American Red Cross volunteer for the past 15 years, Butcher said he is ready to give his full attention to serving others the next time a natural disaster strikes. 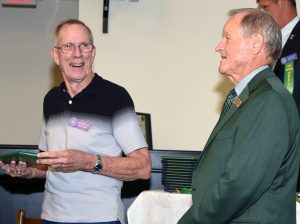 Butcher is a Mass Care Generalist Manager and Region Mass Feed Care Lead for the Central Texas Region of the American Red Cross. He first affiliated with the Red Cross in 2004, when he signed on as a volunteer associate. Over the years, he has been promoted up the volunteer ranks through supervisor, manager and now generalist manager in the Mass Care area.

Prior to his association with the Red Cross, Butcher served as a volunteer fireman and EMT in Texarkana for 19 years. He trained often during that time, including five summers at the A&M Fire School, but decided it was time to try something that was not as physically demanding. “I enjoy helping people,” Butcher said. “I wasn’t ready to stop volunteering, but felt it was time to try something else.” 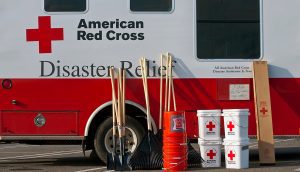 He signed up as a volunteer with the Red Cross in 2004, just before four major hurricanes struck the Florida coastline that year (Charley, Ivan, Jeanne and Frances). He ended up spending six weeks there. “The damage and destruction was unreal,” he recalled.

The following year was no better, as three other major storms, Wilma, Katrina and Rita, hit the U.S. Butcher spent about three months in Alexandria, Louisiana, following Katrina and Rita, running a kitchen to feed those whose homes were destroyed. “On a typical day, I’d get up about 4 a.m. and go to the kitchen we had set up,” Butcher said. “We’d go over the meal counts and meet with the volunteers. Then we would set up our routes and load the food on the ERVs (Emergency Response Vehicles) for lunch and later for dinner We would have anywhere from 4-15 ERVs going out into the neighborhoods to feed people. I’d wait until the last ERV came in and we’d shut things down between 7-9 p.m. Those were long days.”

Butcher said he has been from Florida to the Carolinas and even to California during his time with the Red Cross. He particularly recalls Hurricane Ike in 2008 and more recently, Hurricane Harvey.  “I wasn’t sent to the coast for Harvey, so I didn’t see the areas that were especially damaged,” Butcher explained. “We were setting up shelters in areas like Waco.”

The general public rarely sees all that volunteers with the American Red Cross and other agencies actually do. “There are long hours involved, but it’s worth it,” Butcher said. Many times, the Red Cross volunteers work hand in hand with Baptist volunteers through the Southern Baptist Disaster Relief and Texas Baptist Men. 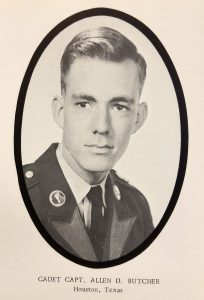 Allen Butcher in the 1968 Crest

“I have worked with some great crews and have made good friends with other volunteers through the years,” Butcher said. “I also have gotten close to some of the families we have helped. I still keep in touch with some of them.”

Butcher said the things he learned in his four years at SMA relate well to the volunteer work he has done and continues to do. “The skills of discipline, teamwork, assigning jobs and being accountable, working together and drilling together . . . these are all things I learned well as an Academy student,” he said. “Also just being in a situation where you start out in a dormitory with a group of strangers who quickly become your friends is similar to what I experience now. I would say everything about my volunteer work relates in some way to what I learned at SMA.”