Listening: Are We Losing a Valuable Skill? 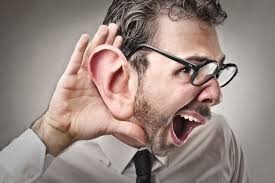 Socrates thought that the written word would bring down mankind. He believed that it would tear down oral traditions. This is why the only information that we have from Socrates’ teachings is due to his students’ records. What Socrates was concerned about–the written word–actually became an invaluable tool in the education process of all mankind. But was this great teacher also correct? Did we lose anything? Are we losing the valuable skill of listening?

The invention of the printing press, typewriters, word processors, computers and smartphones have all met with some resistance. As with any new tool, there is the frustration of learning a new process.  We are, after all, creatures of habit and we tend not to like change. We don’t want to learn new things once we are set in our ways.

Additionally, with any new technology comes the anxiety that a tradition or skill will be lost. The one that sticks out the most to me is listening skills. While there are still teachers and professors who have great lecturing and storytelling abilities, I would argue that few students today listen as they used to. They don’t want to listen. They don’t want to engage personally.

When I was a young boy, I had the privilege to meet some World War II veterans. My father would have these men over to the house for dinner, and I had a front row seat to history. I was mesmerized. I would listen for hours to their stories of battle and life during a time that I would never see. My imagination ran wild like a movie in my head as they described their adventures.

I believe that our youth have been desensitized by our society today. The stimulus of media and the internet grant an instant gratification that requires no imagination. Unfortunately, like the use of a skill, if you don’t use it . . . you lose it. Listening is one of those skills. Listening is half of a conversation. Without conversational skills, our relationships suffer.

While I believe that new technologies have there value, I pray that our young people will renew their people skills. I pray that they will recognize the value of listening. As we have been told, God gave us two ears and one mouth. Imagine what it would be like if the modern young person/student would practice listening twice as much as speaking (or texting). I think it would change the world.