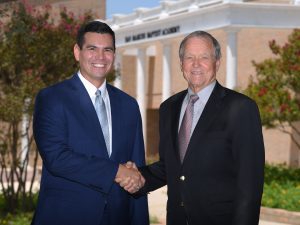 Dr. Brian N. Guenther was named President of San Marcos Academy by the Board of Trustees July 17 and will assume his duties on Aug. 1.

Dr. Guenther will succeed Jimmie W. Scott, who is retiring as President and moving into a new role as President Emeritus. Scott will assist with the transition of the new President while working in the Development Office through Dec. 31, 2018.

In announcing the change in leadership, Dr. Clay Sullivan, Chairman of the Academy Board of Trustees, described Dr. Guenther as one who “has a definite love and a calling to the Academy and its future.”

“After a prayerful interview process, the Board of Trustees has selected a man that many in the San Marcos community already know and respect,” Dr. Sullivan said. “Dr. Guenther is incredibly well prepared to lead students and staff, and we are very confident in him as our new leader.”

Dr. Guenther was named Interim Academic Dean at the Academy in May 2018, after having served three years as Associate Academic Dean for the SMA Lower and Middle schools. Prior to joining the Academy staff, he worked at the Master’s School of San Marcos, serving eight years as Head of School and three years as music teacher and chaplain. He was also a teaching pastor for River Stone Community Church in San Marcos from 2004 to 2011 and served five years as a youth and worship pastor at First Baptist Church in Kingsland, Texas.

A certified superintendent, principal and teacher, Dr. Guenther received his Ed.D. Degree in Education, Educational Leadership and Administration from the University of Mary Hardin-Baylor (UMHB). He also holds a Master of Arts in Christian Higher Education Administration from Dallas Theological Seminary and a Bachelor of Music in Music Education from UMHB. He currently serves as President of the Accreditation Commission of the Texas Association of Baptist Schools.

“Dr. Guenther will have some big shoes to fill as he follows President Scott,” Dr. Sullivan said. “Mr. Scott has committed an enormous portion of his life to SMA, and the students and staff, no matter their position, have been blessed by his guiding hand.  He has chosen to retire from the position of President, but his love and care for the school will last forever.”

San Marcos Academy was founded in 1907 and is an accredited college preparatory school based on Christian values and committed to providing a quality education for young men and women. The Academy is currently enrolling day students in grades K-12 and boarding students in grades 6-12.