Team Followell: Duo to be Campus Ministers at SMA 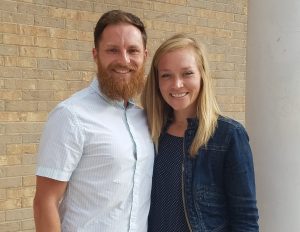 Monica and Clint Followell, who both serve on the staff at First Baptist Church in San Marcos, have been named Campus Ministers at San Marcos Academy, President Brian Guenther announced this week.

The couple will work part-time at the Academy to oversee the student chapel program, coordinate extra-curricular Bible studies and ministry opportunities on campus and serve as liaisons between the Academy, First Baptist Church, and other area churches.

“Monica and Clint will be a perfect fit for our Christian Ministries program,” Dr. Guenther said. “As iron sharpens iron, the Followells sharpen one another and have an effective ministry partnership that will benefit our students at staff at SMA. I appreciate Pastor Chad Chaddick at FBC San Marcos for agreeing to share the Followells with us and look forward to strengthening the historical bond that has existed for decades between the Academy and First Baptist Church.”

Currently, Clint Followell is Minister of Students at FBC, a position he accepted in 2012, when the Followell family moved to San Marcos. A year later, Monica was called to be Minister of Missions at FBC.

Ministry has always been a family effort for the Followells, who met in 2005 when both were serving as counselors at Pine Cove Christian Camp in Tyler. They were also fellow students at Ouachita Baptist University in Arkansas, where they both graduated with degrees in Christian studies.

Married in 2008, the Followells headed to Waco to attend George W. Truett Theological Seminary to complete their Master of Divinity degrees. Clint served as a Youth Pastor at First Baptist Church, Valley Mills, while Monica worked as a Youth Care Counselor at the Methodist Children’s Home.

During their time at Truett, the Followells began to care for their now two oldest children, Brandon and David, adopting them two years later. Their third son, Asher, was born in 2014.

“We are excited to be joining the SMA family,” Monica said. “We hope and pray to be a blessing, as well as to join the Lord in what He is doing in and through the life of students, faculty and staff at SMA. The joy and hope of what is to come is abundantly flowing through our hearts.”

Editor’s Note: Chris Carrier, who served several years as Campus Minister, chose to focus on teaching duties this year at SMA. He teaches courses in Life and Ministry of Christ, Foundations of Christianity and Church History.