Flags of the Nations: SMA Tradition Lives On 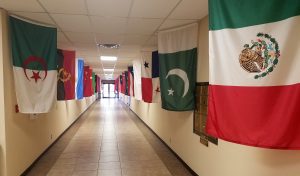 The Academy’s Hall of Flags

When students and staff come into Carroll Hall to eat lunch, drop by the Sabre Bookstore or visit one of the administrative offices, they see the colorful Hallway of Flags hanging on either side of the hall near the infirmary entrance. The 26 flags represent countries from which past and present Academy students have come.

Some of our current students hail from countries that are not represented by a flag. To these students and families, we issue an open invitation to donate a flag to the Academy that represents your country. The flags should be 5 foot by 3 foot nylon flags with grommets to match the ones we currently have in the hall. Also to avoid duplication, students should let Mrs. Madeline De Long in the President’s Office know of their intentions prior to purchasing a flag.  Those interested in ordering flags may want to do so from vendors such as Dixie Flag (San Antonio), American Flag & Flagpole, Amazon.com, United States Flag Store, and Online Flag Stores. 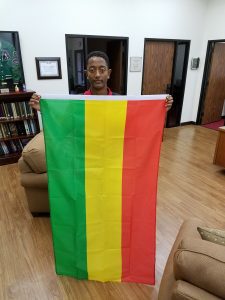 When Noah Getachew arrived at SMA, he brought us an Ethiopian flag.

One of the flags that has been conspicuously absent from our hallway is the U.S. flag! Mrs. Karryn Carnes, Director of Health Services, has offered to purchase and donate an American flag, which should be posted up soon.

Flag protocol dictates that flags be hung in alphabetic order. We presently have an “opening” between each flag hung in the hallway. As future flags arrive, Mrs. De Long plans to insert the new ones in alphabetic order into the openings between the existing flags and we will likely not need to move many flags in the process.

The following are the flags currently hanging in the hallway: Algeria, Angola, Argentina, People’s Republic of China, Denmark, Ethiopia, *Germany, *Ghana, *Honduras, *Hong Kong,  Ivory Coast, *Japan, *Jordan, Mexico, Pakistan, *Panama, *Poland, *Puerto Rico, *Saudi Arabia, *Singapore, *Taiwan, *Thailand, Trinidad & Tobago, *United Arab Emirates, United States of America (coming soon), Venezuela, Vietnam.   (* indicates flags that are either dirty or someone has marked them with what appears to be white out.  These flags may not survive dry cleaning and new ones to replace them are always welcome!)  In past years, we have had flags from Dominican Republic, South Korea and Nigeria, but these are missing now. We would be glad to receive replacements for these flags. 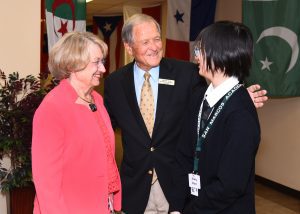 President and Mrs. Scott greet one of our international students from China.

This year at SMA, we have boarding students who are citizens of eleven different countries: Angola, Australia, Burundi, China, England, Ethiopia, Honduras, Hong Kong, India, Mexico and Vietnam. We also have students who are U.S. citizens who live abroad in Singapore, South Korea, Nigeria, Saudi Arabia and United Arab Emirates. The diversity of our student body is one of the many wonderful features of our school.

Flags of the nations have been on display at San Marcos Academy from at least 1961, when a Garden of Flags was dedicated outside Carroll Hall on the Academy’s original campus. Dr. William H. Crook, then president of the Academy, spoke at that dedication 56 years ago. The remarks he made then are still compelling today: 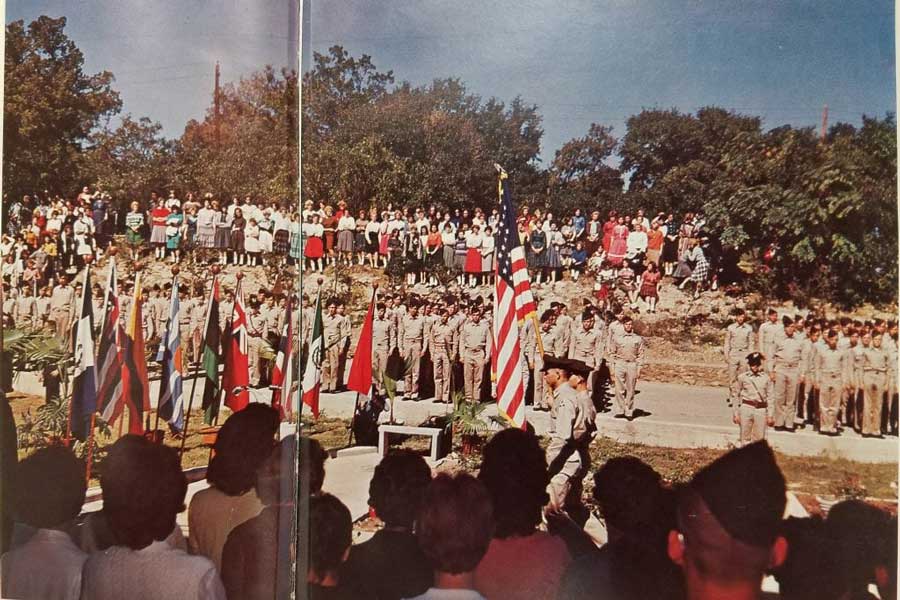 Dedication of the Garden of Flags at SMA in 1961

“We come this morning to dedicate this garden of flags.  Each banner here is cherished by some race of people; each flag signifies some noble virtue, some heroic deed; each banner is so loved that men have died to keep it bright and flying and will die again.  Each flag represents the country from which one of our students comes.  Some live there as guests and others as citizens. Together they make up a garden of flags and symbolize the campus of San Marcos Academy with students from twenty-two foreign countries, living together in harmony and understanding.

“This is the space age.  Everyone is concerned with the space gap that exists between the thrust of our rockets and the thrust of [enemy] rockets. But the real space gap, the space gap we must concentrate upon, the space gap we must dedicate ourselves to, the space gap we must spend our resources upon, is that gap which divides men. It is the purpose of this school to train astronauts to explore the space that separates one man from another because of differences in faith, in economic standards, in cultural backgrounds, in the hues and colors of the skin. Once our fathers wondered “what is on the other side of the Mississippi or the Alleghenies?” Now their children are wondering what is on the other side of the moon, of the stars, and we plan to find out.  But first and too long delayed, we must explore and civilize the space that separates men and prevents them from realizing the full potential of humanity.”