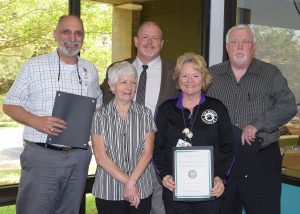 As we say farewell to our seniors in a few short weeks, we will also be saying our goodbyes to some faculty and staff who have recently announced their plans to retire or to pursue other opportunities next year.

Jeff Baergen, our executive vice president, shared with the faculty and staff April 18 his plans to move with his family at the end of the school year to their home in Rockport, Texas. He will be working full-time and training with Londa May of Campus Selection, an educational consulting firm, where he can use his experience in private education to help families find the right school for their children. He also was accepted to a doctoral program at Wayland Baptist University and is considering that as a future endeavor as well.

During his 21 years at San Marcos Academy, Mr. Baergen held several different positions, including Boys Dormitory Director, drama instructor, Director of Student Activities, Director of Admissions and Vice President for Academy Affairs. He was promoted to the office of Executive Vice President in 2015.

“I have pretty much worked in every department,” Mr. Baergen said. “I came here in my 20’s and I will be forever grateful to Jimmie Scott for hiring me so many years ago. It was and still is a true ministry that I have felt in my heart. We have transformed lives here; I thank you for allowing me to be a part of such a viable ministry that connects with kids and helps them find a path.”

In response to the announcement, President Scott said, “With his many talents and the wonderful rapport he has with our students, Jeff will leave a big hole here at the Academy and we will miss him and his sweet family very much. I am delighted that he will be working with Londa May, who has been a friend of the Academy for many years. Jeff’s skill at relational ministry and his Christian example has served the Academy so well over the years, and I am so grateful for the impact he has had on the lives of students.”

“This is the hardest job I’ve ever loved,” Dr. Bryant said to those gathered at the Employee Awards Ceremony in the library. “As I look around the room, I see all the life stories I have been privileged to be a part of, and I have such a great fondness for all the memories. Thank you for being a part of my life.”

Dr. Bryant, who has been teaching classes at Texas State University this year, said he aspires to transition into the higher education field as well as to spend more time with his family, travel, research and write. If God leads, he said he would also consider itinerant preaching or interim ministerial positions.

“Bob Bryant has been such an integral part of our academic program at the Academy,” President Scott said. “His professionalism, tireless work ethic and expertise, especially in the area of accreditation, are of the highest caliber, and he lives out his Christian faith in an exemplary manner. Although he is leaving our academic program in good hands with Dr. Guenther, we will surely miss Bob and Ruby.” 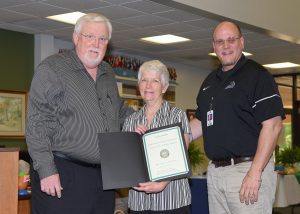 Mrs. Lynne Ritchie is recognized by Dr. Bob Bryant and Mr. Chris Carrier for retiring after 31 years at SMA.

Another long-time Academy faculty member, Mrs. Lynne Ritchie, also shared her plans to retire June 30 after 31 years at the Academy. Mrs. Ritchie began her career at SMA as a math teacher. In 2005, she took on counseling duties in addition to teaching, and she has served as the SMA Guidance Counselor full-time for the past several years.

In preparation for her retirement, Mrs. Ritchie has been training Teri Nash, currently the middle school language arts teacher, to take over as Guidance Counselor for the 2018-19 school year. Mrs. Nash is a certified school guidance counselor who served in the Navarro and Seguin School Districts as a counselor for 15 years prior to joining the Academy in 2014. She has been working with Mrs. Ritchie often during the past several months in order to prepare for her new role.

Academy co-eds know Mrs. Ritchie as the coordinator for the Senior Girls Retreat to Leakey, Texas. She first sponsored that trip in 1989 and took over from Katherine Shultz as coordinator in 1994. She will pass on the title to Stacey Herron, who has been part of the Leakey staff for the past 20 years.

In retirement, Mrs. Ritchie plans to serve as a volunteer with Calvary Chapel Fort Worth on their missions to Mexico, where the church sponsors orphanages and builds houses. Mrs. Ritchie has traveled with the church to Mexico 11 times in the past two years and looks forward to making many more trips in the future. She also is looking forward to spending more time with her 14 grandchildren and one great-granddaughter. 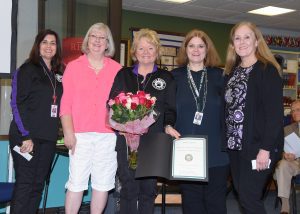 The nursing staff recognizes Karryn Carnes on her retirement.

The fourth retiree SMA celebrated on April 18 was Mrs. Karryn Carnes, director of the Student Health Center. Mrs. Carnes had announced her pending retirement several weeks ago. Taking over for Mrs. Carnes will be Susan Ledbetter, who has been part of the SMA nursing staff for six years and has two children who are graduates of the Academy.

Mrs. Carnes began work at the Academy in 2001 and has provided excellent care to hundreds of SMA students since that time. She and her nursing staff are known for their hospitality, their matching SMA spirit shirts and their friendly faces. During retirement, Mrs. Carnes plans to travel and spend time with her grandchildren. She also will fill in at the infirmary when needed.

In paying tribute to Mrs. Carnes at the employee gathering April 18, Mrs. Ledbetter said, “William Shakespeare once wrote, ‘The meaning of life is to find your gift. The purpose of life is to give it away.’ Thank you, Karryn, for sharing your gift with SMA for 17 years. May you be proud of the work you’ve done, the person you are, & the difference you’ve made.”

Last, but never least, COL Max Smith announced his plans to retire after 21 years at SMA. During his tenure at the Academy, Mr. Smith has taught math and science, serving for many years as department chairman for both subjects. He also served as Assistant Principal, Dean of Students and Commandant for the Corps of Cadets. He additionally worked in the admissions office during the summer from 2005-2012.

Mr. Smith will be remembered as a long-time sponsor of the Junior Class and for selling doughnuts and other snacks from his classroom as a fundraiser for the class. He will also be missed at graduation time, when he prays over the seniors at the Ascension Ceremony and announces their names at Commencement. Students have always appreciated Mr. Smith for being available before school and long after the last bell to provide tutoring and academic support for all who need it.

“My church has asked me to become a full-time pastor, and I am answering that call,” COL Smith said. He has been an elder at the Dayspring Fellowship Church in Austin for many years and said he will now be serving there in a full-time capacity.