Hello SMA family!  I hope you’ve all had a great summer!  Mine has been interesting . . . great, but interesting.  I may ask to speak at a chapel regarding my summer “adventures” but felt led to share them now as well. 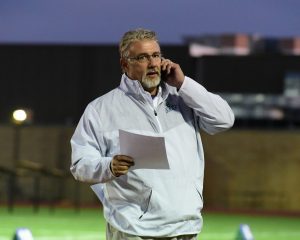 So what I’d like to talk about is something I need to think through and speak of carefully.  What I have experienced was I guess what I’d call a spiritual reawakening, or maybe rejuvenation.  During the school year, as coaches, well really as any SMA staff member, you get caught up in the incredibly fast pace of things.  I know that for me personally, I’ve found myself drifting away from relying on God as much as I should.  Part of that, for me, is sometimes when I am in a comfort zone, I forget that I NEED God on a daily basis.  This is not at all a loss of faith, it’s just a false feeling that I’ve got this on my own.  During the spring semester, things are chaotic for me, but this past spring, I was really in a comfort zone despite the chaos.  I have established, strong relationships with my softball players.  My students, especially in my AP Economics class, were amazing.  Yes I had some very difficult things to deal with, and I dealt with those through prayer for sure, but my regular day to day routine was pretty amazing.

As summer hit, a few things started to happen in my life that pushed me out of the comfort zone, and the result probably saved my life, or at least saved me a pretty hard battle with my health.  It started innocently enough, when an ex-student of SMA came to my house to ask me to officiate her wedding!  I was overwhelmed to the point of tears, but also overwhelmed by the fact that I have never done this before, and with wondering, if I am not ordained as a minister if I can even officiate a wedding in the first place (a question I have yet to resolve).  Hello shrinking comfort zone! 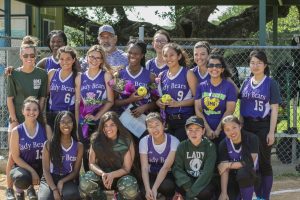 The next thing that happened was one of the coolest things I’ve experienced as a Christian.  I was BLESSED to be selected to coach in the first annual FCA Softball All-Star game.  I’ve known about this for a while, but it was on the back burner during our softball season.  Once our (SMA) season ended, I started thinking about it a lot more.  I was incredibly excited about getting the opportunity to be a part of the event, but idle time can be a problem, and for me, life slowing down a bit meant having time to feel insecure about myself.  I have a really solid relationship with my players, and we’ve built a lot of mutual trust.  I realized as I had time to think about it, that other than Becca [Baergen], there was no one I knew on the Gold Team.  I started to doubt my abilities, or qualifications, for being part of an all start weekend. My comfort zone was diminishing. 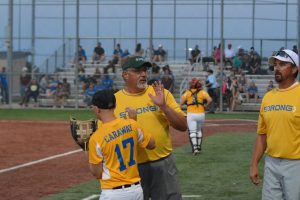 As I was loading gear from my softball shed to take to San Marcos High School for the start of the weekend, I was running late and getting a little flustered, and I very clearly heard the Holy Spirit telling me to put it in his hands.  I literally pulled the van over as I drove out of the front gate at SMA, and said a very quick prayer, “God, I’m putting this in your hands,” and immediately afterward a feeling of complete peace, no more nerves, and I knew right then that it was going to be an incredible experience.  Other than being absolutely physically drained when it was done, I can tell you that’s exactly what it ended up being, an incredible experience! 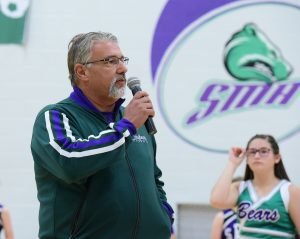 So a lot of prologue to the part where my life might have been saved, and I apologize for that, but those of you that know me know that I have a hard time keeping a story short, especially when I’m excited!  So the lesson learned, the FCA All-Star weekend was the recharge I needed to draw me back to the closer relationship I need with God.  Not too long after the All-Star weekend, I woke up with a pretty upset stomach.  Details probably are best left to a minimum, but I was basically uncomfortable but functional.  I was trying desperately to get the summer fertilizer application on the three fields before the rain hit.  I got the practice field done, but around 10:30 AM I had to hop off the mower to throw up, and when I did so, I realized that I had become incredibly achy.  It is very much against my OCD nature with the fields to walk away before finishing something my mind is set on finishing, but again I pretty clearly heard the Holy Spirit, telling me to go home.  I went and lay down, my fever kicked up, and the aches got a lot worse.  I really thought I was going to sleep it off, but around 10:30 that night I threw up one more time, and realized at that time that I was getting tight in my chest, and it was getting a little tougher to breathe.

Some of you know this, a lot more probably don’t, so a little bit about my health issues:  I am diabetic, have a bad liver, have asthma, and also sleep apnea.  Otherwise I am very healthy, LOL.  It sounds bad, but it is mostly under control and so I function pretty well, but probably ten or more years ago, I had an asthma attack that came close to killing me, and I told my wife and daughter that the tightness I felt wasn’t that bad, but reminded me of when I had the bad attack several years ago.  My family was pretty terrified, because the last thing they expected was for ME to say I needed to go to ER, but again, I feel pretty certain that the Holy Spirit was telling me to listen to my body.  Interestingly, my fever actually broke at that time. I had been close to 103, which under normal circumstances would be another reason I would use to NOT go to the ER.  What I found out that night (or to be more accurate, early that next morning) was that I had pneumonia and was starting to become septic. 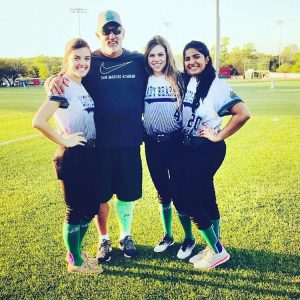 If I hadn’t gone to the ER when I did, things would have gotten a lot worse very quickly.  They put four bags of saline in me to rehydrate me, and pumped in antibiotics and steroids to deal with the sepsis and the pneumonia, and the speed in which that was done quite likely saved my life.  I really don’t like thinking about the what-ifs, but I really do believe that had my relationship with the Lord not made a jump back to where it needed to be, that the what-ifs could have been really bleak. PRAISE GOD!!!   Instead of having something really bad happen, I was released from the hospital after two days, with no lingering damage, other than having to build my stamina back up as I’ve recovered from the pneumonia.  I am incredibly lucky, and God is good!